Hard lenses also have a higher tendency to "pop" out. Gas-permeable lenses are a compromise between hard and soft lenses, providing greater comfort than hard lenses while having a lower risk of tearing than soft lenses. Contact lenses are typically worn during the day and removed at night for cleaning. Extended-wear lenses enable users to wear their contacts for longer periods of time, including while sleeping. One-a-day contact lenses have recently gained popularity among lens wearers. These contacts are worn for one day and then discarded, eliminating the need to clean them every night.

A plastic polymer is used as the raw material for contact lenses. (A polymer is a material blend formed by joining the molecules of various chemical substances.) Hard contact lenses are made of a polymer called polymethyl methacrylate (PMMA). Soft contact lenses are made of a hydrophilic polymer, such as poly hydroxyethyl methacrylate (pHEMA), which can absorb water while maintaining shape and optic functions. Lens manufacturers are constantly updating the science of lens material, and the specific material of any contact lens may differ depending on the maker.

Contact lenses can be made by either cutting a blank on a lathe or molding them. The lens is formed by shaping the plastic into specific curvatures. The major lens curves are known as the central anterior curve (CAC) and the central posterior curve (CPC) (CPC). The CAC is the overall curve of the lens's outward facing side. This outer contour generates the proper refractive change to meet the patient's visual requirements. The CPC is the lens's concave inner side. This corresponds to the patient's eye measurements. These two curves are usually formed first, and the lens is then referred to as semi-finished. When the peripheral and intermediate curves are formed and the edge is shaped, the lens is considered finished.

Molding the lens can be done in a variety of ways. Spin-cast lenses were first developed in Prague. In open rotating molds, three different fluids were poured. The mold shaped the outside curvature of the lens, and the inside curvature was formed based on the rotational speed of the mold. The centrifugal force of the spinning mold caused the fluids to polymerize, and the molecular chains linked to form the required hydrophilic plastic. Injection molding is a more dependable mass-production method for Contact Lenses. Under pressure, molten plastic is injected into the mold in injection molding. The lens is then extracted from the mold and cooled. After that, the lens is finished on a lathe. It is also possible to manufacture lenses entirely through molding, which eliminates the need for lathe cutting. This is a relatively new advancement made possible by highly automated, computer-controlled mold production.

The initial forming of the lens can also be accomplished on a lathe. First, a blank is created. The blank is a circle that is only slightly larger than the finished lens size. This can be made by cutting a plastic rod or stamping a plastic sheet. A drop of molten wax is then used to secure the blank to a steel button. The button is then centered on a lathe, which starts spinning quickly. To form the CPC, a cutting tool, such as a diamond or a laser, makes concave cuts in the blank. To guide the lens operator, indicators on the lathe measure the depth of the cuts.

The blank button is then transferred to a lapping machine. The blank is held against a lapper, which is a revolving disk coated with an abrasive compound, by the lapping machine. The shape of the lapper corresponds to the CPC of the lens. The blank is spun in one direction while the lapper is spun in the other. It also makes a small figure eight movement with the blank. The abrasion polishes the surface of the lens.

The polished lens is then secured to a steel shaft known as an arbor. The arbor's end has been ground to match the CPC so that the lens will fit on the shaft. The arbor is mounted in a lathe, and the operator makes convex cuts in the lens to form the CAC, the other major curve. This side of the lens has now been polished, and the lapper has been modified to fit the convex CAC. When the lens's second side is polished, it is considered semi-finished.

Before the contact lens will fit perfectly on the patient's eye, several more curves must be ground. The final curves are the peripheral anterior and posterior curves, as well as the intermediate anterior and posterior curves, which govern the shape of the lens closest to and next to the edge. The lens is suction-mounted or double-sided taped to an arbor. The arbor is installed in the lathe or grinding machine. These shallower cuts can be ground with emery paper or cut with a razor blade. The diameter of the lens can also be reduced at this time.

Because contact lenses are medical devices that must be custom fit, quality control is critical. After each stage of the manufacturing process, the lenses are inspected. Anomalies in the lenses are examined under magnification. A shadow graph is also used to measure them. A magnified shadow of the lens is cast on a screen with a graph imprinted on it for measuring diameter and curvature. Any flaws in the lens shape are visible in the shadow. This procedure could be carried out automatically by a computer.

After passing inspection, the lenses are disinfected. To soften the lenses, they are boiled in a solution of water and salt for several hours. The lenses are then packaged. A glass bottle filled with salt water and corked with rubber or metal is the standard lens packaging. The soft contact lens's hydrophilic material absorbs saline solution similarly to human tears, becoming soft and flexible. In this state, the lenses are ready to be worn.

Contact lens materials are the subject of extensive research. Scientists are working on various chemical formulations that may improve the properties of the plastic. A silicone compound known as siloxane is currently being researched as a polymer. Siloxanes form a thin, flexible film with a 25-fold higher oxygen transmission rate than standard soft lenses. However, this compound has a disadvantage: it does not easily wet and attracts lipids (fats) to its surface, causing it to cloud. Researchers discovered a method to add flour molecules to silicone compounds to make them resistant to lipids. They then chemically attached a wetting agent that, when boiled in a saline solution, changes the shape of its molecules, allowing the material to absorb water like a traditional soft lens. This material could lead to long-lasting contact lenses that can be worn for weeks at a time in the future.

Researchers are also investigating new polymers for use in scleral lenses. Keratophores are normal for most people, but large scleral lenses can help patients with severely damaged corneas. Some patients cannot regain vision without a corneal transplant due to eye problems, but scleral lenses can help patients avoid eye surgery. The scleral lens sits on the white of the eye, forming a vault over the cornea. This space in the cornea is filled with artificial tears, which help to smooth out the cornea's damaged surface. Scleral lenses were previously uncomfortable because they did not allow enough oxygen into the eye, but research into new materials is focusing on more oxygen-permeable lenses.

On the Space Shuttle Endeavour, materials for oxygen-permeable lenses were also tested. The experiment's designers believe that microgravity conditions will encourage the development of lens materials that repel debris better and handle oxygen more efficiently than polymers created in traditional laboratories. A new generation of colored contact lenses could be manufactured in space if commercially viable.

The contacts were comfortable to wear most of the day. Visibility is limited since the side walls are white. Most annoying aspect was when they would rotate 5 degrees with every blink, causing the slit to appear horizontal or offset to the other side.
Maybe making them weighted would fix this issue. 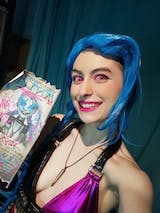 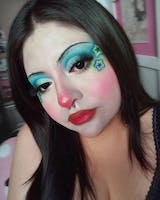 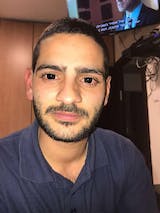